« Hey, Run Your Fingers Through My Hair | Main | Survivorship » 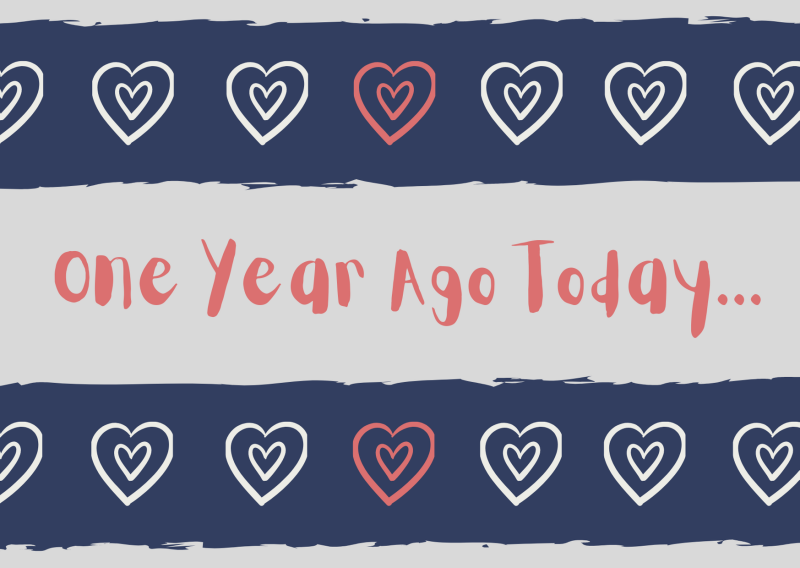 525,600: that’s how many minutes are in one year. Thousands of little moments that make up a year in all of our lives.  And what a year it’s been.

One year ago today, we received Dan’s official diagnosis of Multiple Myeloma (MM).  On one hand, it seems like a lifetime ago and on the other, it seems like just a couple of months.

Yet here we are a year out from the most terrifying moment of our lives and we’re OK.  Dan is doing really well.  His immune system is very slowly coming back and his blood counts are good.  In fact, he was doing so well that he didn’t need to have another bone marrow biopsy 30 days post-transplant and his daily lab appointments are now only every two weeks.

Thankfully, Dan is still working from home and between that and Instacart and Shipt, we really don’t have to leave the house.  It’s not always easy, but it’s definitely manageable.

I promised myself when Dan got sick that I was going to keep a positive attitude and I think I’ve done a pretty good job of that…for the most part.

That’s not to say that it’s been a piece of cake.  I get overwhelmed with so much to do, to remember, and to juggle.  There is always an undercurrent of worry. Is he eating enough? Is he sleeping enough? Is he keeping any side effects from me? Is the transplant doing what it’s supposed to?  Will it keep the cancer at bay?  What if it doesn’t?  Add COVID, politics, medical bills, losing our sweet boy Ziggy in February, and isolation into the mix and it’s not always hearts and flowers.

There’s nothing romantic or noble about cancer.  None of that “Love is never having to say you’re sorry” bullshit.  Love is saying sorry A LOT.

I’m not some long-suffering Florence Nightingale and he’s not a cancer-stricken superhero. We’re just two normal, flawed people trying to navigate a whole new world on our own.   We both could be better at times, but overall, we’re handling everything that’s been thrown our way.

Cancer changes everything. One day you’re a couple and you’re just going along doing your thing and then BOOM. Roles get switched up and you go from romantic life partners to patient and caregiver and you have to really work at not JUST being the latter. But it’s hard. For both people.

Of course, it’s harder for Dan. He has to deal with not only the physical effects, which are MANY, but also having to be “the patient”.  I think that part has been the hardest part for him.  Early on he talked about feeling like “a fraud” because he didn’t look sick and wasn’t suffering from side effects.

That changed pre-transplant and post-transplant.  When he lost his hair, he looked sick for the first time and then with the pre-transplant chemotherapy, he FELT sick too.  That was a really difficult time because everything that worked before didn’t work this time.  I couldn’t cheerlead him into feeling better, nor could I really understand what he was going through from an emotional standpoint.

Over the past few weeks, we’ve had some really meaningful conversations about all of this and I think it’s helped both of us. He misses the old Dan.  So do I.  But he’s still in there and he’ll be back even better than before. In fact, we’ve named him DAN 2.0.

Many transplant patients describe feeling a “rebirth” after their recovery.  While I can’t speak for Dan, I know that I feel different. Watching a person you love get a literal second chance in life is pretty powerful.  It makes you think a lot about your own life, your choices, and your path in life.  I hope it will make me a better person.  I think it will.

IN THE BLINK OF AN EYE

So, what’s next?  Currently Dan is still on some anti-virals and antibiotics while his immune system is still so fragile. He has also started a “maintenance dose” of Revlimid which is one of the 3 drugs he took when he first started treatment.  It is part of a class of drugs called immunomodulatory drugs (IMiDs), which work against cancer cells partly by supporting the function of the immune system.

He’s on a lesser dose than he was initially, but he’s taking it every day now instead of 14 days on and 7 days off.  The side effects have been relatively mild - mainly some neuropathy in a couple of his fingers.  It isn’t painful, but feels more like tingling and some numbness.  It isn’t constant, but happens occasionally.

Every so often he gets some weird vision stuff…similar to the “kaleidoscope” sensation he had back in the beginning.  It has only happened a couple of times and through trial and error, he discovered that if he closes one eye for a few seconds it goes away.  So, if you happen to be on a Zoom call with him and it looks like he’s winking at you, he’s not.

In late December (at the 100-day mark), Dan will have another full body PET scan, a bone marrow biopsy, and a bone test.  At this point we’ll meet with his oncologist to find out the next steps.  It’s called a “Survivorship Plan” and it's where they prepare you for a healthy life after cancer.

I like hearing that word “survivor” because Dan really is one.  He has been through the wringer and he handled the poking, prodding, drugs, back braces, MRIs, side effects, radiation, chemotherapy, CT scans, PET scans, and bone marrow biopsies in a way that brings tears to my eyes.

“SEASONS OF LOVE” from “Rent” by Jonathan Larson

In daylights, in sunsets
In midnights, in cups of coffee
In inches, in miles, in laughter, in strife
In five hundred twenty-five thousand six hundred minutes
How do you measure, a year in the life?

It's time now, to sing out
Though the story never ends
Let's celebrate
Remember a year in the life of friends

Nancy and Dan. When I saw the title of this post, I'm thinking, hmm, sounds familiar. Then I found myself humming as I'm reading. Perfect background music my dears.
As I continued to read, I realized that the one thing that is equal to love is humor. Nancy and I began laughing the minute we met each other. I'm assuming she only married Dan because he could keep her laughing!
Humor is seriously so important in our lives, especially this year and especially in a year of cancer.
So, continue to tickle each other with words. Music is well up there too.
May you both continue to love each other with many doses of laughter and a beautiful musical background.