A Short Update with MRIs and Werewolves

I spent Monday morning at the Heart Clinic.  Doctor-types somehow found Atrial Fibrillation, which I think started during (because of?) this MM mess we're in - being a trained cardiologist and all, that's my theory anyway.

I had a two hour (no exaggeration) MRI to study my heart, followed by a glued-on monitor that I'm supposed to mail back in a week.  That's it.  All the news for now.

But having an MRI reminded me of a blog post Nancy wrote a few years ago on another web-neighborhood platform where we used to belong and post.  She doesn't do MRIs very well.

Below is her post.  I still crack-up thinking about it.

For some time now (almost two years), I've been having shoulder issues - mainly pain and discomfort, which has now decided to travel to the muscles in my forearm and my shoulder blade.

I'm pretty sure it started when I quit work and was spending a lot of time sitting cross-legged on the floor, hunched over the laptop.

Anyway...after going to my family doctor, two chiropractors, and having two rounds of physical therapy, x-rays, cortisone injections and acupuncture, I'm still not getting any relief.   So...this week I went to a well known orthopedic center in Minneapolis to see a shoulder specialist.   After the disinterested jackholes I've seen, this new guy was a dream.  He thinks that I've been subjected to too much "guesswork" and not much concrete information.  He recommended an MRI, which I had first thing this morning. 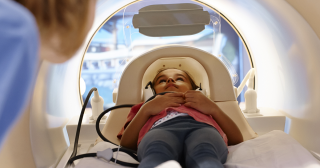 I've never had one before and wasn't worried about it at all....until I read the instructions asking if I had "claustrophobia".  I don't. Although I'm not in love with confined spaces.  (Remind me to tell you about the time I got stuck in a tanning bed during a tornado-induced power outage...back in the days when you pulled the lid closed with an electric lift...and paid money to "tan" in a little room by yourself.)

Anyway...while sitting in the MRI waiting room, I started to think about claustrophobic situations: being buried alive; being locked in the trunk of a madman's car; slow death by quicksand; being hugged by someone who's too needy...you get the point.

I should mention that when I was a child, I read a book about witches, warlocks and vampires and there was a story about villagers in Romania who would get so intoxicated that they would pass out in the streets and it was such a dead drunk that everyone thought the person was dead.  The "body" was thrown into the back of a wagon to be transported to a local field to be buried.

The story was that many people awoke from the bouncing of the wooden wagon wheels on the cobblestone roads.  The book went on to speculate about how many people were buried alive and woke up from their drunken state only to be buried under a pile of dirt and rocks.   That story has always freaked me out.  Oh, I also had a dream as a child that my mother was buried alive and I was the only person who could hear her screaming from the grave.  My dad and my sister Patty sat calmly placing yellow roses on the gravesite, but my mom was screaming to me to dig her out.

OK...maybe I do have claustrophobic issues.  But on a conscious level I don't.  In fact, I would prefer to take an airline flight entirely sitting in the bathroom. I like the closeness of the walls and the humming white noise. Isn't that the opposite of claustrophobia? Or maybe it's something else.

I get into the MRI room and I see the behemoth machine and start to get a little angst-y, but I'm still OK.  The technician was great. She had this very soothing mom-like voice, she explained about the call button and that I could ring it whenever I needed. She asked me which satellite station I wanted to listen to on the headphones and I chose 70's music because that tends to put me in a happy place.

The procedure starts with me being glided into the machine.  I keep my eyes closed because I'm afraid I'm going to knock my head on the ceiling.  I get in and feel a cool fan.  That's good news - I tend to get warm when I'm nervous.  I tentatively open my eyes and realize it's not as close to my face as I had assumed and I could see out the bottom.  Everything from my hips down was exposed.  Whew.  I'm not totally entombed.

She explains that the scan will take about 25 minutes and it will go in intervals of 2.5 to 5 minutes with breaks in between.  The more she talks, the more the call button starts to get slick with my palm sweat.  I want to tell her to shut her filthy pie hole and get moving, but I push those mean thoughts away.  She's just doing her job and is actually quite nice.

She instructs me to remain still...as still as possible otherwise we have to start over.  Oh shit.  That's too much pressure.  Suddenly I have the overwhelming urge to kick my feet, wiggle my ears, shrug my shoulders, thrust my pelvis up and down....and with that urge comes the panic.  I talk to myself and say "all is well....this is a good thing you are doing for your shoulder....aren't you glad you have health insurance and can afford to have this test done?"

Yes I tend to calm myself down, not with kind, loving thoughts, but with practical, rational ones.  My husband Dan wonders why I don't accept kindness well when I'm stressed out. 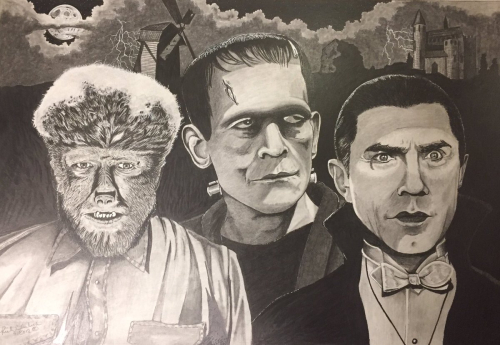 So the machine starts and the headphones kick in.  I expect to hear the soothing tones of Karen Carpenter, maybe a little Barry White, Barry Manilow....fuck, at this point, I'll take Barry Williams.  But no...some song about "clap at the wolfman".   Nice.  What do you think I think about at this point?  That friggin' book from my childhood about witches, warlocks and vampires.  No, there weren't any werewolf stories in there, but come on...when you think of Dracula, don't you automatically think about Frankenstein and the Wolfman?

I've done two 2.5 minutes round which means I'm a 5th of the way done.  Things are going well.  Until the next song....Olivia Newton-John mewling something about "if you love me, let me know...if you don't, then let me go.  I can't take another minute or a day without you in it."

LET ME GO?  I CAN'T TAKE ANOTHER MINUTE?  Is this some sick MRI technician joke?  The urge to laugh kicks in again, but there's a not-so-subtle undertone of panic.  Thankfully, my compulsive need to not embarrass myself allows me to talk myself into relaxing again.

After a series of 3 minute scans, the technician says "almost done, you're going great, we're almost done....you've been holding so still."  Uh oh.  The urge to ring that goddamned call bell is raging through me....I want to flail my arms and legs.  Please stop talking to me.  Please stop talking to me! Don't tell me to hold still because I want to do the exact opposite.  It's the whole "laughing in church" thing....when I KNOW I'm not allowed to do something, this crazy urge comes over me to do the exact thing I'm told not to.  Am I the only person who experiences this?  Shut up Nancy.  Quit thinking about it.

On no, I'm going to start laughing and it's going to be 4th grade math class all over again.   A girl farted during a test, I tried not to laugh. But I started laughing.  Mrs. Kandler looked up at me over her cat-eye glasses and glared.  What is happening? I had never been glared at by a teacher and I love Mrs. Kandler.  I'm a good kid...didn't you hear that she farted?   The only thing I could do to stop laughing was to burst into tears.  Not just little girl tears, but loud, bellowing, racking sobs.  Something a 4th grader in room full of 4th graders doesn't want to do. 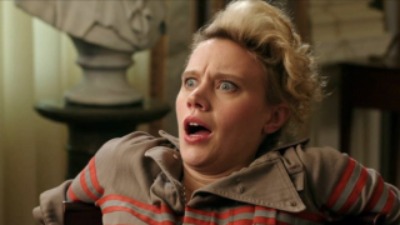 "OK Nancy, we're ready to start the final 3 minute scan.  Are you ready?  Yes, I'm ready."   The loud banging of the MRI machine starts as does the final song.  "Disco Inferno".  I swear to you.  Disco Inferno with a chorus that goes "Burn Baby Burn".   Now I'm racked with visions of being burned alive like the mother-f-ing witches in that book.  My brain starts thinking about electrical fires and me being trapped in the MRI machine.

My ankle starts to twitch, my leg starts to shake, I have a frog in my throat that swallowing won't get rid of.  I have to cough.  I'm going to choke to death on my own spit.  What if I cough, sit up as a reflex and bash my head on the ceiling of the machine?  I'm going to crack my head open and bleed to death before she gets me out of here.  My ear itches.  Oh god, I don't have a bra on and I'm going to be taken out of here through the lobby without a bra on. Burn Baby Burn.  How do morbidly obese people get in these machines?  Has anyone ever gotten stuck?  Shut up Nancy.

The machine said GE...that's a good company, I'm sure they're sensitive to the morbidly obese.  Dan is in the lobby, he'll pull me out if the electricity goes out.  He's not afraid of fire.  I wonder if he's afraid of werewolves.  He'll know the name of that stupid song.  He went to high school in the 70's, he's kind of a hippie.  Charles Manson was a hippie.

And then....silence.   Nice mom-voice technician tells me I'm done and that I did a great job.  She slides me out, the air is cool, the sun is shining and I'm totally calm.  She says to me "how was it?".  I reply..."oh it was fine, no problems at all".

"You were very still", she replies.  "Some people really have a hard time of it, I'm glad it went so smoothly for you."

I walked out of there with a bounciness reserved for pardoned death row prisoners.  And boy, was I happy to get my bra back on.